In 1996, Myron Cope gave the ownership of The Terrible Towel® trademark to Merakey AVS 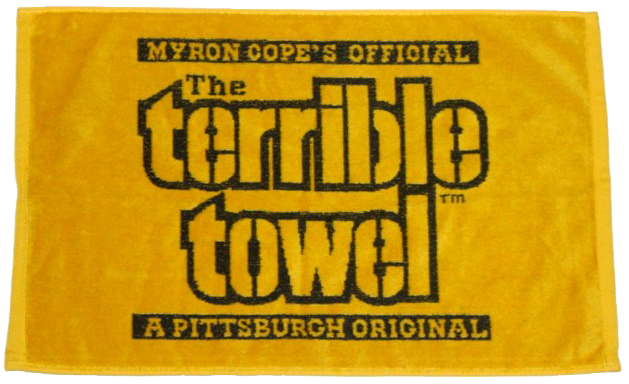 During any game involving the Pittsburgh Steelers, there is a sea of towels waving throughout the stands. What creates this colorful vision? The Terrible Towel.

In 1975, The Terrible Towel was created by the late Steelers broadcaster Myron Cope to inspire fan involvement in a playoff game against the then-Baltimore Colts.  Decades later, The Terrible Towel remains a Steelers fan essential.  And for the past 24 years, the sale of any The Terrible Towel product benefits the individuals with intellectual and developmental disabilities who are supported by Merakey Allegheny Valley School (AVS).

In 1996, Myron Cope gave the ownership of The Terrible Towel trademark to AVS.  Since then, the royalties from the sale of all officially licensed “Terrible Stuff” (including towels, ties, ornaments, lapel pins, flags, bibs, cookies, temporary tattoos and more) have come to Merakey AVS.

Long-time friend to Allegheny Valley School, Myron Cope, passed away in February 2008.  Myron’s involvement with Allegheny Valley School stretched more than a quarter century when his son became a resident of AVS. “The Terrible Towel’s long history and the spirit it brings to the Steelers Nation is phenomenal,” states Merakey AVS’s Executive Director, Development & Communications Dorothy Hunter Gordon. “What many may not know is that the sale of every officially licensed Terrible Towel item helps people with intellectual and developmental disabilities. Merakey AVS is eternally grateful for the legacy Myron Cope has entrusted to us.”

Merakey AVS has been providing services to people with intellectual and developmental disabilities since 1960.  The organization was founded to provide care for 10 children for whom a closing orphanage was unable to find adoptive families.  For 60 years Merakey AVS has been providing compassionate care for some of our society’s most vulnerable citizens.  Today, Merakey AVS provides services to nearly 800 individuals through 125 programs and facilities in nine counties across Pennsylvania.  In 2008, AVS became an affiliate of Merakey (formally NHS Human Services, Inc.).  Merakey (merakey.org), through its subsidiaries and affiliates, is one of the nation’s leading non-profit providers of community-based education and human services.

You can cheer on the Steelers and also support Merakey AVS by purchasing Myron Cope's Official The Terrible Towel® products. To order, call 1-800-832-6883 or order online by clicking here. All officially licensed products contain a tag that identifies that a portion of the proceeds from the sale of the item will benefit Merakey Allegheny Valley School. If you see a The Terrible Towel® product for sale and it does not include this tag, it may be unlicensed. If you spot a product without the tag, please contact Dorothy Hunter Gordon at DGordon@merakey.org or 412-299-7777 with the details.